A Real Estate Coaching Client recently expressed this (above) affirmation to me *(note the langage, he didn't say he failed or was failing, he said he was a failure). 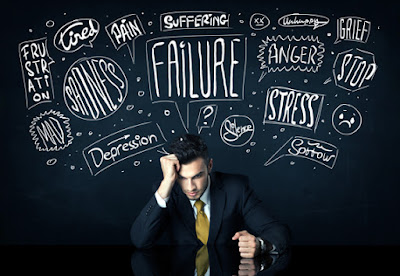 He had come to this realization after reflecting back over the past 6-months of no deals, and realized he had over 120 leads and had only made 3 offers.  He was scared or something.  I'm not sure.  Of those 120 leads, he should have made at least 100 offers.

Here's the lesson:  Learning to see yourself as a winner and to feel like a winner happens primarily as a result of having small successful experiences and thinking self-affirming thoughts. When we believe our efforts will be successful, we become venturesome and are most likely to undertake an activity or task. Because we expect to succeed, we persist until we do. This successful experience causes self-affirming thoughts, which boost our self-esteem, enhances our self-efficacy, make us feel good, and leads us to believe we will do well in the future. Thus, we attempt more and the upward spiral continues. This internal system helps us grow and develop -- a natural continuous quality improvement program.

There is, however, an equally powerful downward spiral that can interrupt the natural growth process. If we believe we are likely to fail, we undertake activities tentatively, expecting a negative outcome. We feel anxious about our performance, we avoid or remove ourselves from anxiety-producing situations. When we fail, we say "I told you so" to ourselves and make a mental note to avoid similar situations in the future. When we expect failure and succeed anyway, we toss it off to luck or say it's a "fluke" or "only temporary," and hold on to our negative beliefs

Here's the bottom line. On a fundamental level, your thoughts create your reality. If you think you have the capacity to assume total control of your life, take on new challenges, learn from your mistakes, and persevere to get the results you want, you will! But if you believe that no matter how hard you try, you’ll never succeed, guess what? Your fears will become a self-fulfilling prophecy.

The key word I want you to pull out of the paragraph above is "believe", it's the most powerful of

If you know personally that you don't have the skill or the ability to become a leader, then why should I invest in the time and skills that go along with it?
If you know personally that the seller would say no to your offer, why would I even give the offer?
You see?  From belief comes behavior.  I won't set myself up to be embarrassed, b/c I already know the seller is going to reject my offer.  If your belief is that you won't get the deal, you won't even try.  If the belief is that you won't be able to win the race, well then, you won't even try.
How then are these beliefs formed?  It always gets created in our mind.  We can touch the hot stove, and learn that the stove is hot, but it's not just that one time that we experience the hot stove.  We play it over and over again in our mind, we have 50,000 thoughts a day, do you think that the hot stove or fill in the blank, once it's played over and over, day after day, month after month, that a certain amount of imprinting goes on, and we may have perceived the entire thing wrong to begin with!    Sometimes we don't think about what's wrong with us for just an hour, but sometimes a whole day, or a week, or a month or years or even for a lifetime.  That's how beliefs are formed, and often the wrong beliefs are formed.
Become aware of how you talk to you.  Become aware of how other people talk to you and who you give permission to (or sanction to), to talk to you that way.  Your self talk reinforces your beliefs, at a subconscious level.
Remember, the truth may not be the truth, and that's how you change beliefs, which change behavior.   So what is the first step?   Set a goal, make your plan, work your plan, and get feedback for the results.  Along the way, monitor your self-talk and when you do something wrong, say to yourself "that's not like me, I do it this way"
.
Posted by Marc at 5:23 PM 1 comment: